Work on the mission briefings is well underway. Craig wrote up scripts for mission briefings, based on what he'd received from the mission design specs. These scripts were taken up to the sound department where Marshall and Gavin worked with voice actors on take after take to get the speeches just right. There were no opportunities for volunteers as there sometimes are—I have done a couple of takes in the sound room in the past, but I fear my voice brims over with enthusiasm when I try out so my utility is limited—but that's okay. I'm always a bit embarrassed to hear myself on these things anyway—it's bad enough listening to myself on the answering machine.

Next: the visuals. In KKND2 we are using fully-rendered 3D models rather than actors for the mission briefings. David W, Adam and Marnie created the 3D models used for the mission briefings, and they were animated to move their faces in a realistic manner using our own in-house facial motion capture tool FAMOUS. FAMOUS is a mixture of hardware and software which allows facial motion to be captured in real-time. Basically what happens is that the face whose motion is to be captured is plastered with reflective dots. As the face moves, the points on the face with dots catch the light and the distance and direction they have moved are instantly translated onto the on-screen model's equivalent facial points. Obviously it's not that simple as the rest of the on-screen model's face must be appropriately contorted, but you get the basic idea. (There's this great photo I have someplace that I clipped out of the newspaper here of Craig the designer in the FAMOUS getup. Craig is always larger than life—it's part of what makes him the funniest guy I know—and his exaggerated expressions are really perfect for FAMOUS to home in on.) Glen H and Thomas have set up and supervised the facial actors and the output from FAMOUS is being sent back to the artists to touch up the frames as necessary and render out the final mission briefing. 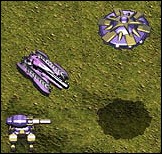 The intro sequence is being done by Chris, and the three end sequences by Sam, Brendan and Domenic. They create and animate the wire frame models, frame by frame, as well as creating and layering the backdrops. Lighting and point-of-view can be set within the 3D software which really helps the sequence's composition, but I believe these guys do composition and cutting as well as any experienced film maker. They then render out each frame at the rate of one frame very two hours, and that's using a render farm of 8 processors. It's a slow process! The intro sequence is the longest we've ever attempted—three and a half minutes in all. When Chris and the others finish an FMV scene, work in the KKND2 room stops as everyone crowds around one terminal to view it over and over. I haven't seen nearly all of the parts that make up these sequences, but every piece I've seen has been realistic and evocative. I've just seen one where a mute gets squashed like a bug under tank treads. Gross! Great! And this is before sound has been added.

The new sidebar design is now complete. It's a simplified, streamlined construct that won't distract you from the game in progress. Production functions are now at the top as they're the most-used parts of the bar. Dan is responsible for the final look and layout of the bar and Damien is designing the look of the interface in general. Toby is fiddling with the sidebar icons—his eagle eyes have caught a pixel out of place and instantly he's zoomed in on the problem to smooth the right edge of the building icon. Other artists casually stand around watching and point out possible improvements: "those towers are too squat". They're talking about 5 pixels, total. Ah, the life of an artist! So much patience; so much eyestrain!

Someone asked me about 21st Century units so I asked Dan. He says the units from the original KKND are still in KKND2, but there are two new units also, the dropship and the UFO. The dropship is a high-tech carrier. The UFO, well I almost died laughing seeing it in action for the first time. It "abducts" infantry units instead of killing them, and it has a mean lightning gun.

I just went up to the sound studio to hear some of the music we're going to be using in KKND2. Marshall was pretty enthusiastic as Chris Gilbey, who's a producer from Sydney, sent down a six minute track he reckoned was going to be perfect for the Evolved. Dark techno, lots of percussion, subtle variations all the way through.—it's going to be very cool indeed. Now I hear there's going to be a music CD for KKND2 - Marshall has done a couple of tracks and this Sydney bunch has composed a whole lot more. So you'll get to hear our evocative in-game themes and rush out and buy the CD to hum along to in your car. Sounds cool to me.
This week Justin suggested the title KKND2: Rock Paper Scissors just to see what would happen. We hit him. A lot.