Alpha and Beta incarnations of KKND 2

In the months before the June 1998 launch of KKND 2: Krossfire, there were playable demos sent to the press. There appear to have been multiple of such versions and even two of these were leaked.

The earliest version that we currently know about was given to the press. It is an early Alpha demo from 24th November 1997. It is named "Build #145" and has just one playable mission: Heavy Weapons Operation (surv_01). The briefing video of the mission is vastly different from the retail version. It was given to the Italian PC Gamer magazine and even found its way onto their cover CD #028 B in March 1998. This demo is quite dysfunctional as it often crashes and the mission itself is pretty hard. It seems to work only on Windows versions before XP.

A subsequent version of the demo wasn't published, but at least did make it into a preview article in the April 1998 Issue 98 of the French magazine: Joystick (thanks to: Abandonware Magazines). The Series 9 mission playable in that demo is: Divide & Conquer (robo_04).

The next report that we have is from issue 05/98 of the German magazine PC Action. There isn't much information in this article either, but at least they explicitly refer to a playable Beta version. This reference was also quoted in the official German advert for KKND 2. The screenshots of the Survivors mission Strike Three (surv_08) that appears in this article is not from the demo they mention, as it is a promotional screen shot released by Beamsoft or Melbourne House.

Probably around the same time as the PC Action article dates the only leaked press beta. It's from 20th February, 1998 and was given to the Polish magazine Secret Service, where it was put onto the cover disk of issue #58 (06/98). The demo allows you to play one mission of each faction, each mission has a briefing and it comes with a promotional version of the Surv01 theme.

The three playable missions are:

Development of the Series 9

The design for Survivors and Evolved was pretty much finished by the time of the Alpha. However, the Series 9 was last in the development process. It was the new faction and required ongoing design changes, even late in the game's development. This leads us to having quite a number of unfinished or alternate variants of Series 9 graphics in the Alpha and Beta version giving clues about some of the original intentions of the designers. Firstly, the zoom of all building icons farther out than in the retail version. This made them very pixelated, so they were later changed to show more detail. The Alpha does not even have any Series 9 icons - they just used KKnD 1 icons as place-holders.

The sidebar icons are the same as on Beta screen shots, having a Boundary Fence as icon for the walls menu item, while the retail version has a symbolic brick wall. The Barn is the buildings icon instead of a mirrored Microunit Factory. The Tower icon of the Beta had a flatter base compared to its retail counterpart. Lastly, the highlight color of the Beta version is yellow, while the final version uses green.

More substantial, but not game-changing differences can be found in the Windmill and AA Tower. The Windmill had a box next to it which was probably removed because Survivors and Series 9 contained less clutter around their structures. The AA Tower went through some more redesigning: the clunky frustum-shaped base was flattened out and became more techy and the flimsy turret got replaced with a more heavy gun so it is more comparable to the bulky cannons of most other towers. Only the icons of those two buildings appear in the Beta, while the Alpha has the graphics (but no icons, as mentioned before). There is a bunch of promotional screen shots showing early versions of the Windmill.

We find the biggest and most important differences in the prototype menu. The slot-filler arrow has a buggy texture (and is no arrow) and some icons are unrefined. The AA Turret is very blocky and doesn’t really fit the sci-fi theme of the Series 9. The metal rods connecting the menu buttons with the sidebar are slightly farther apart than in the final version (probably for symmetry reasons with the arrow buttons). The icons for Transport both show the transport vehicle instead of a bunch of Seeders. The Laser turret looked more like a metal duck beak than a functional laser gun, so it was later redone (the Beta already has the new graphics, iirc).

There are even more interesting difference when we look at the Repair turret. Unlike the assembly line style robot welding arm of the retail game, it was a pillar with a spheric device on top. I had cracked maps for the Beta that had high tech levels enabled. Sadly I lost those maps and can’t remember if the animation for repair was using some sort of beam or if it just repaired without direct contact. If I ever get hold of the cracked maps again, I will clarify this and release them to public.

And finally we get to the most fundamental difference: The large vehicle base was a walker, it has no wheels or tank tracks. Walking tanks are quite a theme in KKND 2 and especially for the Series 9. Series 9 has only two vehicles that are motorized in a conventional way (Tankbot and Oilbot, though the wheels of the Oilbot looks more like from iRobot, than actually wheels). All other vehicles float (Patrolbot, Responsebot, Radiator, Doom Dome) or (especially large ones) walk (Cauteriser, Grim Reaper). We can only make guesses why the large walker base was dropped, but most likely the graphics didn’t look satisfying. Having yet another spider or crawler would have been a little repetitive. So the experimental look was dropped and replaced with the more conservative and solid tank variant. There are no known screen shots of that walker unit, but the backside of the US release of KKND 2 shows a pretty mysterious screen shot from an unknown version of the game, that had some different graphics and a walker unit, probably the medium prototype base.

The Alpha has the walker base sprites and the Beta has the icon.

The Survivors interface of the Alpha is so drastically different from the retail version, that it's not worth comparing them in detail. So I'll let the icons speak for themselves, together with some promotional screenshots: 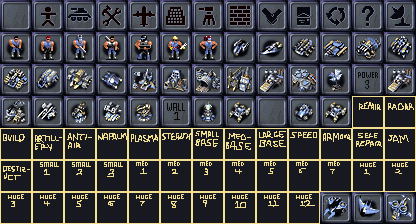 While Alpha Build #145 is currently the earliest documented and online published version, we have a hint to one earlier version. On October 9, 2013, the user filazaf made his only post at BetaArchive.com, after which he sadly never returned, writing the following:

Hello guys, i'm looking for very early version of KKnD2 (not KKnD2: KrossFire) i have it on demo disc from I/O magazine or something like that. It was called KKnD, but looking like KKnD Extreme + new unit(scrab-> oil tanker for evolued) and special abilites, like relocating bulding.
Can you help me find it?

I must admit that I didn't take him seriously back then, because his claim seemed unrealistic to me, especially since we didn't know about Build #145 by that time. Now that we got an Alpha, I think he was right and really had an even earlier build. The "KKnD Extreme + new unit[s]" description fits quite well, since the Alpha already has a lot of place-holders from KKnD 1. He doesn't describe the relocating in much detail, but it must have been either a debug feature, or is probably related to the "Build" turret seen in the icon sheet above.

Another indicator for a yet undiscovered milestone, are the campaign screen graphics. We have them from alpha, French press beta, Polish press beta and retail version. The alpha has a menu background that I would describe as Tech Clutter, the French beta has old Brushed Steel, the Polish beta has new Brushed Steel (improvement of the older version that basically repeated itself after half height of the image) and retail is simply Gears. The map screen itself has its own border that had to be made fitting to the background as it does not use transparency.

Background and map of the retail version fits together smoothly.

The Polish beta is correct, too. In the French beta, the menu background is old brushed steel, while the map background is Tech Clutter.

In the Alpha, the menu background is Tech Clutter like the map, but they don't align properly, resulting in the implication of yet another, older version:

And finally I close this article with a quote from the Development Diary of KKND 2:

So, they were talking about Kollateral Damage as a name for KKND2. The best of a bad lot so far. But Marketing is rejecting it because "not everyone knows what ’collateral’ means." Can you believe that?

Written in November 2014 by Hallfiry