Wow! I just checked some of the new backgrounds for KKnD2. Shane has some of the graphic routines up and running, and John has put together some great high-color backgrounds. John creates the backgrounds as "tiles" of terrain with different features, and kind of stamps them onto the map area and mattes together the edges of the tiles (which mostly they don't need). The result is seamless and stunning—this kicks butt over the original KKND art. They've got some of the map areas animating - in particular they have up and running a truly cool volcano spurting out bubbles of hot lava, and the oil patches bubble away all on their own. The ripples across the water make it look so crisp and clear that you could jump right in.

There are more varied terrain types in this new KKND. The Highland areas, which are largely complete, now include densely forested areas as well as large tracts of green and more marshy or swampy areas. Desert areas now have sheer quarried cliffs, sand dunes and impassible rifts. The new Urban terrain will have crumbling city blocks and broken roads, aqueducts and flattened slagged expanses.

I have noticed that the new backgrounds also include remnants from the battles that took place in the original KKND, including old burnt-out outposts and even bits of old crab claws and tank treads. Quicksand may be a problem in the marshy Highland areas, threatening to swallow up infantry and even small vehicles without a trace. Bridges can be blown up in KKND2, which can lead to tactical advantage or stalemate.

Another cool feature in KKnD2 is the effect that different terrains will have on unit speed and accessibility. For example all ground units will travel at a good speed while on roads but some will slow down considerably on sand. The terrain is 3D, so that Infantry will be able to hide from the enemy behind clumps of vegetation and pounce on them in ambush, and line of sight will be a real issue. 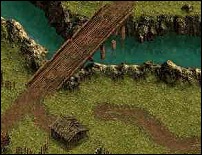 It's been decided that the way the sprite art is to be split up is that each artist will be made responsible for one of the three armies. Dan as lead artist got to claim the Survivors, Jeremy took the Evolved, and Toby grabbed the Series 9. I reckon Toby's going to have the best time of it, as he gets to design the whole race from scratch. Craig's given rough guidelines for what sorts of looks he'd like to see but I think if Toby comes up with something great, he can draw them any way he wants. There are going to be new units for the other two races, but they'll be at least somewhat stylistically constrained by the art from the original KKND.

The sprites are going to be 8-bit, so they'll have more colors than in the original KKND and on that alone should look much better than the old ones. Shane has been working on sprite routines but there's not a lot to see yet.

Bantered about as a possible name for KKND2 is Fight Unlimited. Sounds like an arcade-style fighting game. We'll see how long this one lasts.